How long does it take to edit my video request?

Written by Migle
Updated over a week ago

We have general estimates for videos based on their length for Scale and Pro plans. These estimates are intended as general guidelines. More complex edits will take more time, while simpler requests will take less time. You can also fasten the turnaround time as a client. The final turnaround time will depend on the production team's estimate. 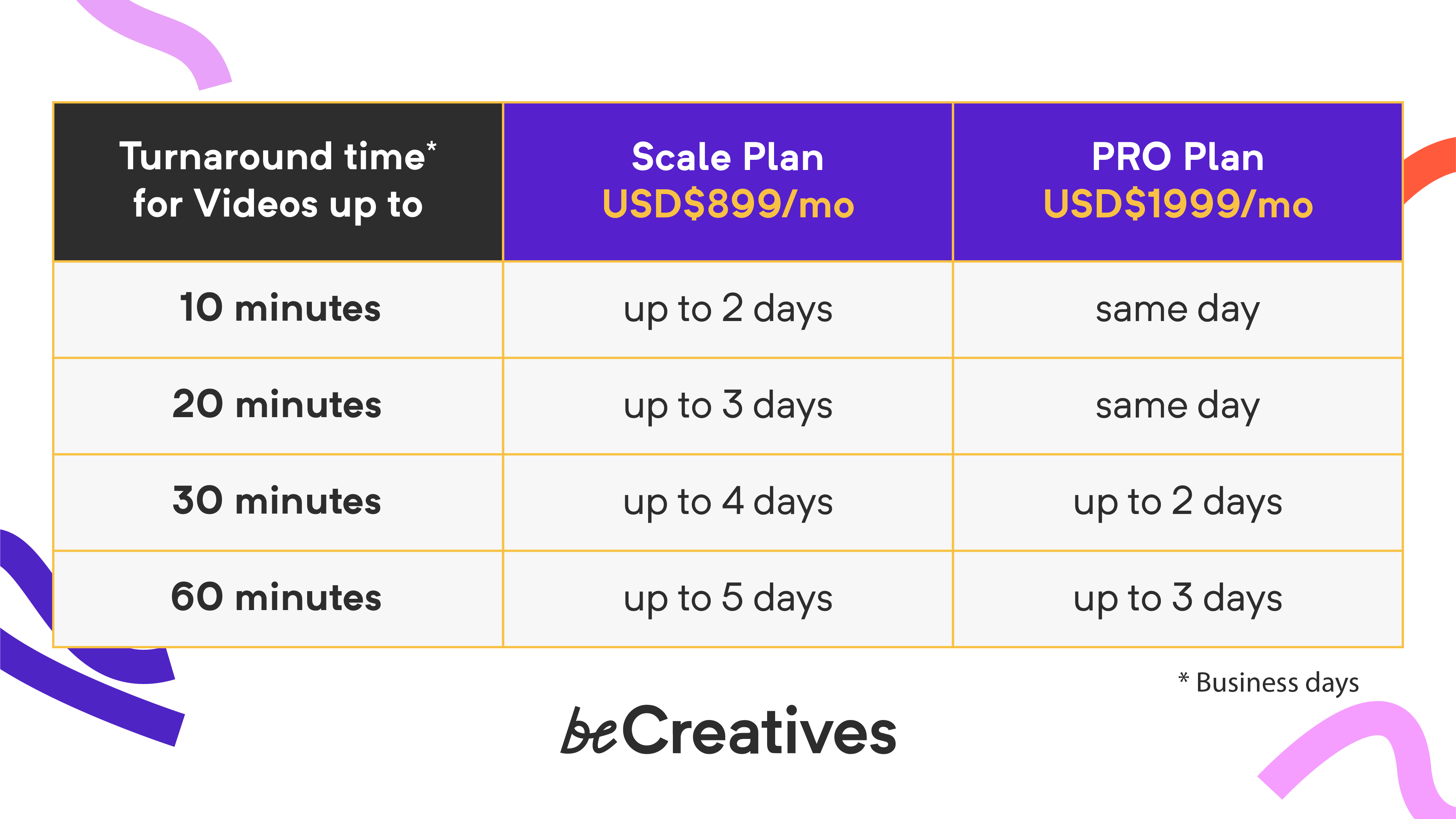 *All estimates are dependent on the scope of a request, complexity or request details. Timelines may vary and are subject to the production team's estimation, but we will deliver your requests as fast as possible, while maintaining the highest quality.

A fully edited video with a design template, engaging animations and b-roll throughout the video, subtitles, transitions would fall under these general estimates in most cases.

Faster turnaround times than the ones indicated would apply to requests that are short, simple or do not require much editing (might be Reels, TikToks, Youtube Shorts, videos that only require minimal editing, etc.). These may fall under same-day delivery rather than what general estimates suggest and you can even get multiple requests edited per day, especially with a Pro plan.

What determines scope or complexity of requests?

There are a lot of reasons why a request could take longer than usual, but the 3 most common reasons are scope, complexity and request details.

The turnaround time may be longer if the length of footage for a request is 5 or more times longer than the final edit, or the footage consists of many different files and/or unselected shots. Or if you are requesting multiple edits in one request.

If the video request has many requirements, immense engaging elements such as texts, high level of detail, needs custom animations, footage is shot with cameras that require extensive post-production, needs advanced VFX, heavy SFX, 3D animation and so on.

When your video request has some out of scope elements, needs additional information, has broken links or corrupted footage.

You can have a look at our Official Scope Of Service to know what we can do for you and what we can not for your subscription plans.

How can you, as a client, fasten the turnaround time for your requests?

You, as a client, have the power to make the edit less time consuming for the editor, hence having a quicker turnaround time and increasing the chances of getting multiple edits a day.

Why did my editor exceed the general estimate for the turnaround time?

If your request can not be completed within 1 editing round, it's probably due to the bigger scope or complexity than average. If this is the case, your editor will send you a message to let you know they'll need extra time to finish your request.

Why did you separate my request into multiple requests?

Requests that have a few different video edits may need to be divided into smaller requests. However, when the request or project is extremely large and contains a series of video requests, our team might ask you to separate the request from your end instead.

I was promised X videos per day/week/month, but that is not the case!

We cannot guarantee the turnaround time or the number of videos per business day, week or month. Because there are too many different variables with each video request, client, and editor, it's almost impossible to give an exact turnaround time until we have seen your request and brief/instructions. If turnaround time was ever discussed, it was most likely an estimate.

Estimates change depending on how smoothly your request is processed and if revisions are needed, or if you want another request to be edited first as it has a higher priority. As we edit one video at a time, these factors affect the turnaround time of your requests.

Did this answer your question?